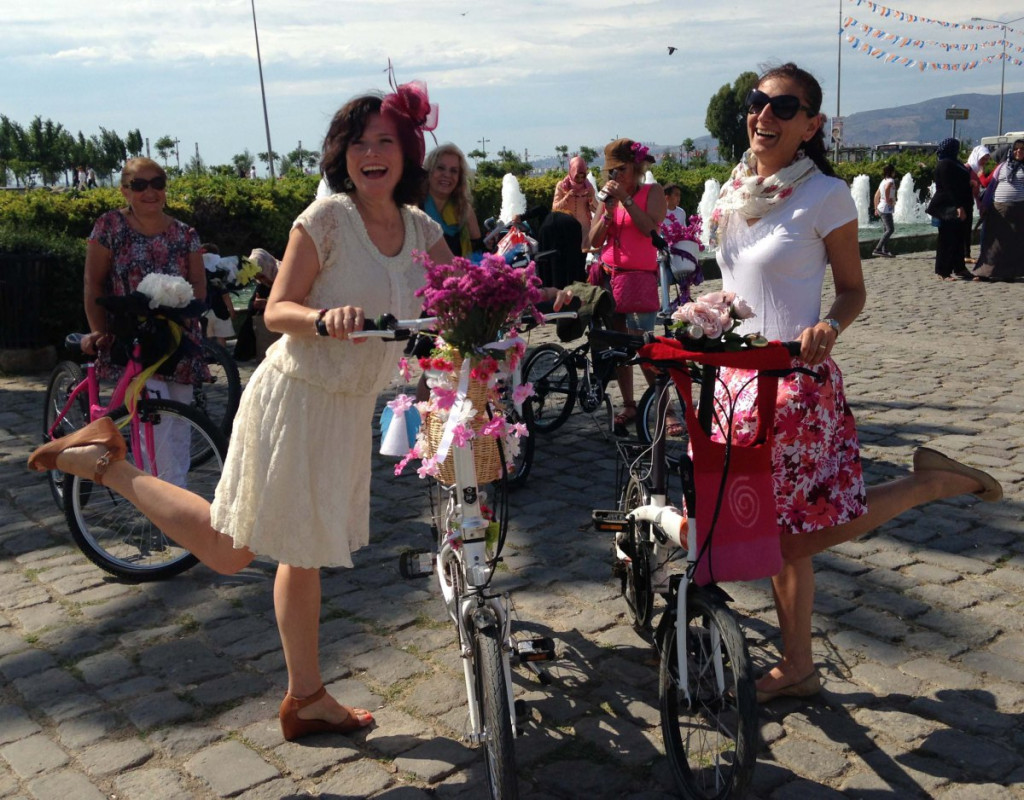 Izmir’s annual Chic Women’s Bicycle Tour, a mix of women’s rights and green transport, has spread to 28 cities including Cyprus. “A society can only breathe if its women are not afraid of being visible,” says Sema Gür, founder of the initiative.

Thousands of women bikers from 28 cities in Turkey and Turkish Republic of Northern Cyprus got behind the wheel this Sunday (Sept 24) for annual “Chic Women’s Bicycle Tour” in a peaceful demonstration that combines feminism and green transport.

The  bike tour,  initiated by Izmir-based history teacher  and late bloomer cyclist Sema Gür,  four years ago was a modest attempt to create awareness and encouragement to women who want to bike. But quickly, it has evolved into a rights platform, where women put on their most colourful costumes, decorated their bikes and pushed the pedals for more rights and less harassment, on the road and in life.

This year’s “Chic Women’s Bicycle Tour”, which took place in 27 cities including İstanbul, İzmir, Bursa and Çorum, had many participants that wore shorts – a reference to Ayşegül Terzi, a nurse who was attacked by a man for wearing shorts.

In social media, it was also linked to the fatwa by Iran's Supreme Leader, Ali Khamenei that bans women from cycling in public, even if they were clothes that met the Islamic republic’s clothing rules. “Look how Turks can cycle easily, while Iranian women cannot. Thank you Atatürk!” said a tweet.

“We have the Chic Women Bicycle Tour because we are women and we want to be visible. There are many women who are not in this country” said Sema Gür at the beginning of the tour that started at Konak and ended at the city’s Republic Square. At the end women formed their bicycles into a heart and danced to the sound of Turkey’s 70’s pop hit “Hayat Bayram Olsa.” (If Only Life was a Feast).

“A society can only breathe through the visibility of their women – when they are on the road or anywhere in the daily life, without any fear. Bicycle is a sign of liberty. We are here as free individuals and we demand respect for everybody’s individual liberties,” she said. The crowds cheered as she delivered the punch-line: “We want respect for bicycles, for women bikers. We demand respect for women.”

This clear message was carefully crafted, after much deliberation in the wake of recent abuses on women. “I am under a lot of pressure to make this bicycle tour a protest movement for Terzi and urge everyone to come in shorts,” Gür told HDN a few days before the tour. “This is not a single-issue demonstration – the tour is a platform whose only condition is that women who want to participate dress up and decorate their bikes. Those who want to come with shorts are welcome, as well as those who want to come with headscarves. This is open to all women - in shorts, headscarved, LGBTI and all.”

From mobility to liberty

“In the beginning, it was simply an attempt to make cycling more women-friendly,” Sema Gür told Hürriyet Daily News in a phone interview. “I started cycling as I approached my forties and saw immediately that it was not a sport that accommodated women. Everything was very masculine - the routes chosen, the lycra clothes, the soberness of bikes… So I decided that I would wear skirts, put flowers on my bike and create a movement that encourages women to cycle on their terms, with their idea of aesthetics. I put forward the idea of having a ‘Chic Women’s Bicycle Tour’ on Facebook, not sure whether it would take off. I wanted it to be a festival that is part of the World Clean Mobility Week celebrations every year.”

“I guess we did get the wheels moving,” Gür added. “We have started a relationship of cooperation with the Izmir municipality and they have set up a Bicycle Desk, whose members take up our complaints. It is a good beginning but more needs to be done. When I bike on the sea front to the city centre, I stop at least a dozen times. The construction has completely paralyzed the bike route and we have not been offered an alternative.”

In recent years, several women’s bicycling initiatives have been founded.  Istanbul-based movement, Women Bicyclists’ Initiative, which was established in 2015, has just published a bicycling guide for women – a small booklet that helps them get a start on biking, explains traffic rules, fun ways to integrate biking to daily life and stories of women who bike.

Despite the small-and-medium scale movements, however, biking is still rare in Turkey and rarer still among women. Only 17 percent of the population use a bike – a number that falls to 5 percent when you look at the female population. Only six in a thousand women of Istanbul, Turkey’s largest and arguably most modern city, use bicycle in their daily lives. This is not related to religion. Unlike in Iran, there is not a “religion link.” Asked about this, Turkey’s religious authorities say that bikes are admissible for both men and women, provided they behave in a manner that does not conflict with customs – i.e. dress provocatively.

However, 65 percent of women would like to ride a bike. This is precisely the target group of Sema Gür. “Buy that bike, borrow it, take it out of that storage whatever and decorate it. Own it by making it beautiful. Come out with us with colourful hats and headbands and flowers in your hair. Be visible and fearless,” said Gür and women, in Izmir, Istanbul and other cities just did that.